NearFuture5e Shard City is a combination modern/sci-fi rules supplement and campaign setting for playing near-future adventures using 5th Edition rules. The project is currently in development and will be released under the Open Game License.

The finished book will be comprised of two parts:

Part I: NearFuture5e is a supplementary set of rules – including new game mechanics, equipment, backgrounds, feats, skills and character classes – that extend the 5th Edition core rules for running and playing adventures in a specifically near-future genre setting. These rules imagine a world much like our own, but with just enough advancement to allow for technological wizardry.

Part II: Shard City is an original campaign setting in which to run your NearFuture5e adventures. The action takes place in a sleek, stylized but deceptively dystopian city-state ruled by a tyrannical corporate oligarchy. The heroes of the story (i.e. you, the player-characters) work to undermine that tyranny. The campaign setting will include history, locations, factions, prevailing attitudes, adversaries and allies, ongoing struggles, and other lore.

NearFuture5e is a mostly modern genre, but with enough leeway for technological wizardry to make it extra interesting. In short, NearFuture5e imagines a modern world much like our own, but approximately 20 years ahead in technology.

NearFuture5e includes 10 new player character classes, each with two or more class options to further define their roles and focus their abilities.

Each NearFuture5e character class is meant to be a spiritual equivalent to its original 5th Edition medieval-fantasy counterpart – a translation from fantasy to high-tech.

Barbarian » Bruiser. You are strong and robust. You can take a lot of punishment and deal more than your fair share of it. You talk with your fists… and your elbows, knees, forehead, a pool cue, that folding chair over there…

Bard » Face. You rely on your wits, charm and uncanny intuition about people to close deals, talk your way out of trouble, and even glean the thoughts of others. You are difficult to ignore, either due to charismatic charm or disquieting menace.

Druid » Loreseeker. Perhaps the past holds answers for the future. You are driven by insatiable curiosity for ancient knowledge, lost worlds, and the treasures thereof – pursuits which can plunge you and your friends into precarious situations.

Fighter » Soldier. You’re skilled with firearms and explosives, and trained in infantry style combat. Among the specialization options open to you are marksmanship, reconnaissance, demolitions and support weapons.

Monk » Savateur. You’re a master of unarmed combat and acrobatic agility, in top athletic form. You rely on speed, stealth and precision to take down opponents or evade them. The city is your obstacle course.

Paladin » Gunman. You’re a reliable gun-for-hire who operates by a strict code, is perhaps part of a brotherhood, and may even serve a cause greater than yourself. You are effective with firearms, melee weapons, and unarmed combat.

Ranger » Tracker. You’re a skilled marksman, hunter, and survivalist, able to traverse the wilderness solo for long periods and guide other safely through it. You use the terrain to your advantage, both offensively and defensively.

Rogue » Prowler. You rely on superior stealth and agility, as well as your B&E tech, to break into secure places, evade detection, and strike at your enemies from the shadows. Your tools are as varied as your methods and motives.

Sorcerer/Warlock/Wizard » Technologist. You’re a technical genius with an affinity for groundbreaking science and technology. As a Technologist, you introduce technological marvels – and upheavals – to your world.

Each new class includes two or more class options (chosen at 2nd or 3rd level) to further define the focus and special abilities of your NearFuture5e player-character. For example, the class options for the Savateur include the Street Fighter, the Free Runner and the Techno-Ninja.

Finally, each class is intended to be in balance with and complimentary to the original 5th Edition medieval-fantasy character classes to allow for the possibility of adventures featuring both types of player-characters. 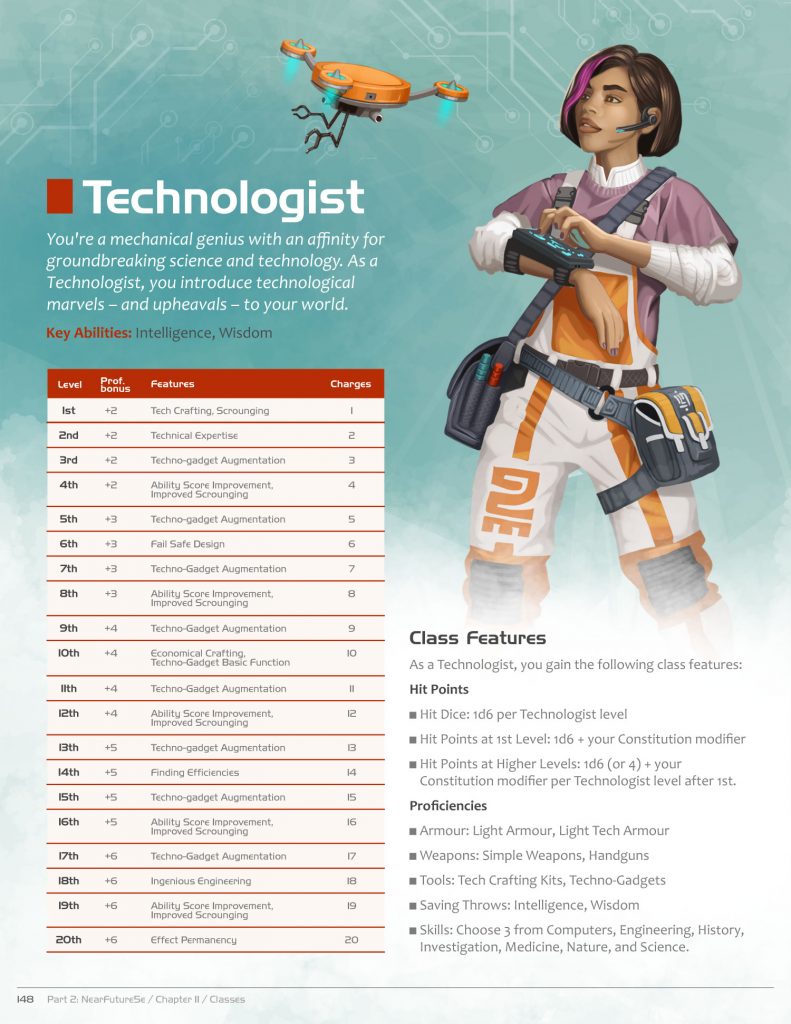 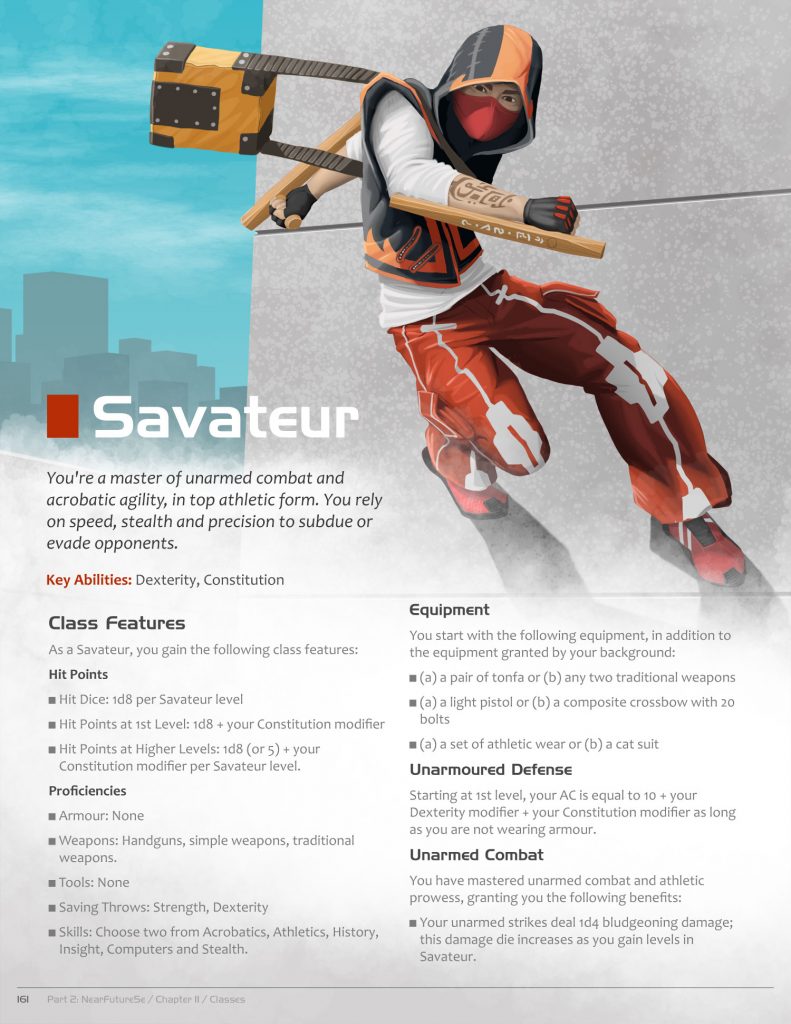 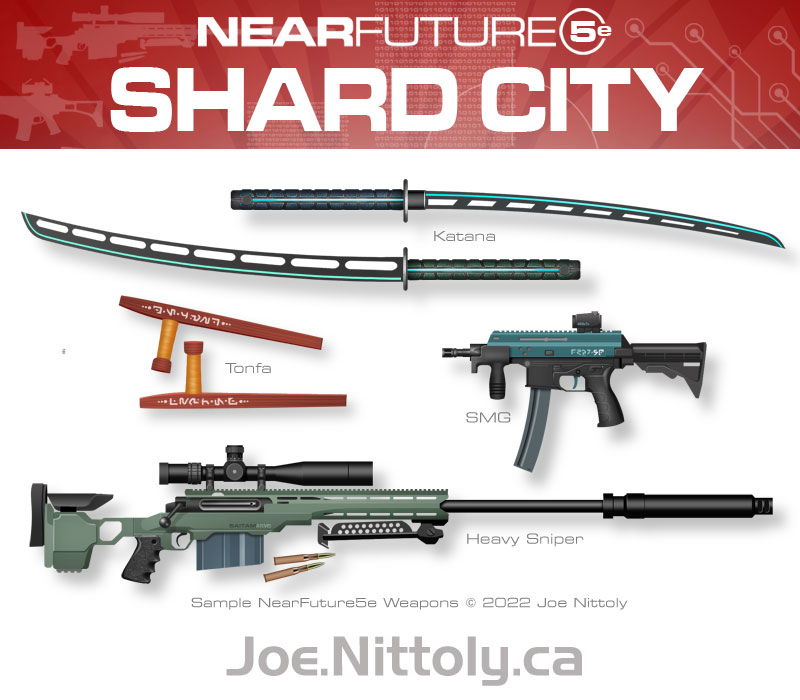 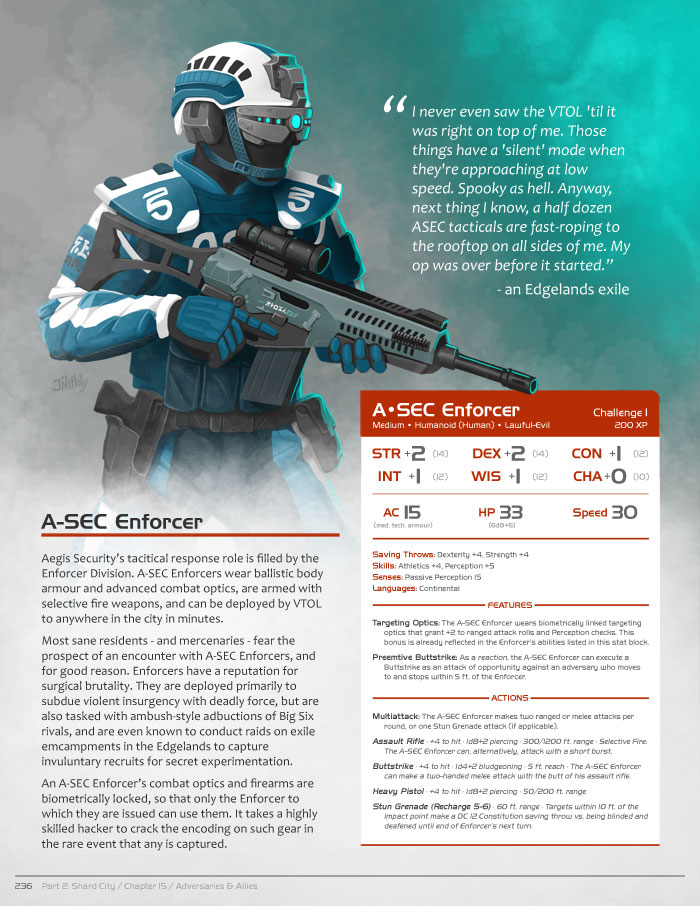 Shard City is set in a world where democracy never took hold and, instead, feudalism endured into the modern era, with ancient dynasties evolving into powerful corporate hegemons.

The world of Shard City is an alternate Earth peopled with humans as we know them, but whose world evolved with entirely different geography, history, cultures and languages.

Shard City itself is a city-state ruled by an oligarchy of powerful dynastic corporations known unofficially as the “Big Six,” who employ propaganda, social conditioning, and the threat of force to keep the citizenry compliant and predictable.

Most residents are willfully blind to the control exerted over their lives by the Big Six, instead convinced that life is good as long as one preserves the status quo and follows the rules.

But a daring few have awoken to the dark tyranny hiding behind the facade of sleek architecture, flashy ads, and media distractions – a tyranny that preys upon the populace in unspeakable ways as a matter of covert policy.

You, the heroes of this world, seek to disrupt that tyranny.

You move in the shadows or hide in plain sight. You trade in money and data. You carry out brazen schemes. You rely on your weapons and you wits. And you fight to undermine the corrupt system – or exploit it for personal gain. Perhaps a bit of both.

But no matter your methods or motives, you avoid direct confrontation with the Big Six corporate security apparatus, because no one stands up to it and survives.

Or so they say…